“I was probably one of the least expected to end up like this: pretty boisterous, 6 foot and a half an inch tall, and built like a tank. I don’t think anyone expected me to get this thing.” 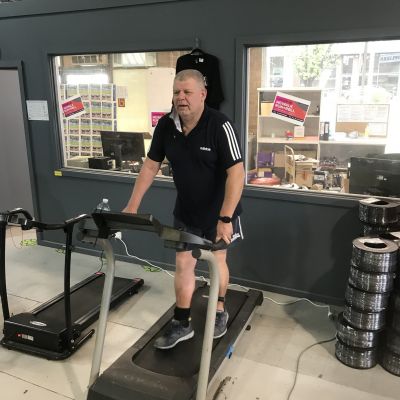 In 2017 Mick relocated to Darwin for a change, where he could commute to Bali for regular holidays and enjoy the bachelor life. At the time he had a little limp, but he did not worry about it, but by January 2018 Mick was in hospital with chronic leg pain and pain in his arm. Mick did not think it was a concern because of his strength, although the doctor had other ideas. Suspecting that Mick had MS, his doctor immediately started doing tests.

In July Mick returned to Melbourne to receive treatment on the advice of his neurologist, by August he was diagnosed with Primary Progressive MS (PPMS).

“MS is a funny thing, me and my sister spoke about this, reflecting back on when we did the MS Readathon, that they didn’t really know what MS was back then... we did it because it was a just cause.”

Most people Mick had met with MS in his adult life had Relapsing and Remitting MS (RRMS), so he was not familiar with PPMS.

“To have got that one (PPMS) first cab off the rank, has been a bit of an eye opener because it just shows you how debilitating some parts of MS can be.”

In early 2020, Mick signed up to participate in the MS Walk Run + Roll, before COVID-19 restrictions came into place. Once things changed and the event became a virtual one, Mick had an idea.

“Get the customers involved, set up two treadmills, put some signage up to get sponsors and get people donating some money."

“We got it set up two months out from the event, we had the two treadmills going. I was on one and someone would jump on the other one, and walk along with me for a km.”

Mick works at MMEM, Australia’s largest electrical wholesaler with 389 stores nationally, and received fantastic support from customers, staff, and contractors. The response was wonderful, and by the end of the month Mick had raised almost $8,000.

“That’s the main motivation of what we did on the treadmill, for awareness and to raise some money.”

Never one to be shy, Mick put a banner on his email, would ask for donations when people asked how he was doing, and after he set his original fundraising goal of $500, he passed it in 15 minutes.

Mick’s fundraising efforts were supported by his son. Like many, Mick’s travel plans were disrupted by COVID-19. Originally, Mick planned to meet his son in Honolulu, however his son is in the navy and was stuck at sea for five months.

When Mick's son and his friends got back, they all went for a drink in Sydney – sailors being sailors, and the first thing Mick’s son did was hold up his phone and say, “I need you to look at this for my old man,” while showing them on Facebook.

In the time it took Mick’s son to leave the table and come back, his friends had added over $1,000 to Mick’s fundraising total.

Now 53, Mick is losing use of his right leg, and can no longer write with his right hand. Incredibly, Mick has learnt to write with his left-hand. He still works and with the continued support of his employer, he hopes to keep working for another three years.

Mick is confident that he will be the one to make a call on what he is capable of, when he should stop driving and being mindful of how safe he is in the workshop.

“You got to be smart enough to make a call.”

Mick will be at the MS Walk Run + Roll in Victoria this World MS Day, if you spot Mick along the track (It shouldn’t be hard given his height), give him a wave!

MS Plus is a combined entity of the Australian Capital Territory, New South Wales, Tasmania and Victoria
providing information, advice, services and support for people living with multiple sclerosis