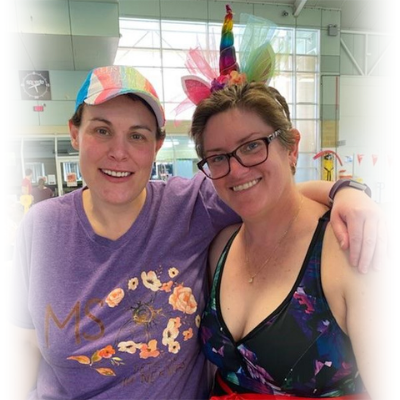 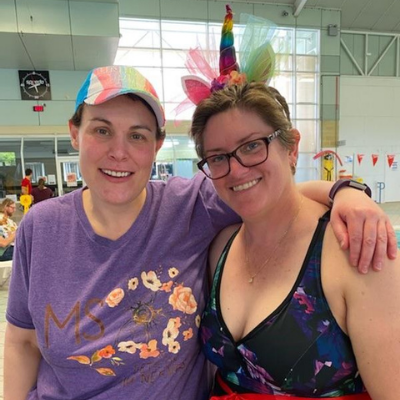 Best friends Michelle Brookfield and Melissa Roche, both from Hobart, have been friends since 2007. They were both working as nurses in Broome, and when Melissa moved to Darwin, Michelle followed her, and they both now live in Hobart. Melissa was diagnosed with MS in 2013 and Michelle was the first person to know that something was wrong.

“When the GP told me that I had lesions in my CT scan, I went home stunned. Soon afterwards Michelle turned up to my house with drinks and pizza, and she was with me when I told my parents over the phone, as they live in Victoria,” Melissa said.

After being diagnosed with MS at 32, Melissa has adapted to the challenges of living with the disease. Prior to being diagnosed, Melissa worked in a busy surgical unit, and her main symptom was fatigue, which started when she was in Darwin. Once Melissa could no longer open IV bags, she moved into another nursing roles with regular hours.

Despite being a nurse, Michelle only knew the basics about MS, and before her friend’s diagnosis, she had not done any fundraising.

Since Melissa’s diagnosis, Michelle and her friends have since raised thousands of dollars for her best mate and other Australians living with MS through the annual Hobart MS Mega Swim.

This year, Melissa and Michelle are banding together again in the Launceston Walk Run + Roll in their new team, the Pink Punks. At the Hobart MS Mega Swims, Melissa and Michelle are known for their fabulous, themed team costumes, including unicorns and mermaids. They are planning to continue the theme, this time recruiting Melissa’s family from Victoria, and Michelle’s children, who affectionately called Melissa “Aunty.”

Since they started fundraising, Melissa and Michelle have raised over $15,000, and this year aim to add at least another $1000 to their total. Even when Melissa has not been able to participate because of her health, she has been on the side-lines, in full costume, cheering for her friends.

“This walk is something I can do with her,” Michelle said.

One of the hardest things for Melissa is managing her fatigue and social connections, a challenge many people living with MS face.

Multiple sclerosis affects more young people than any other chronic neurological condition and the average of diagnosis is 30. It can strike anyone at any time and the symptoms vary dramatically.

“It is a very special friendship that [Michelle and I] have.”

“The support and encouragement from all my friends, family and workmates has been amazing. And this year many local businesses got behind our fundraising efforts which has blown me away,” Melissa said.