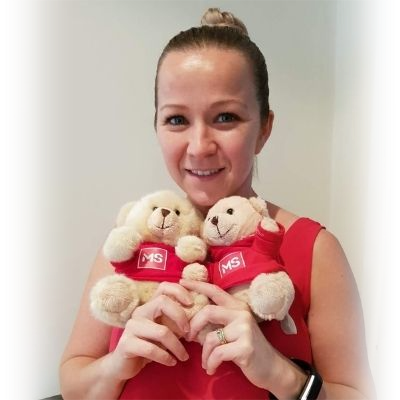 Before she was diagnosed, Rachael was working in the travel industry as a documentation manager when her vision went blurry in one eye.

"I had a couple of other symptoms but didn’t take any notice of them. I was a fit, healthy normal 20 year old. I also got pins and needles in my back but thought I’d pinched a nerve." 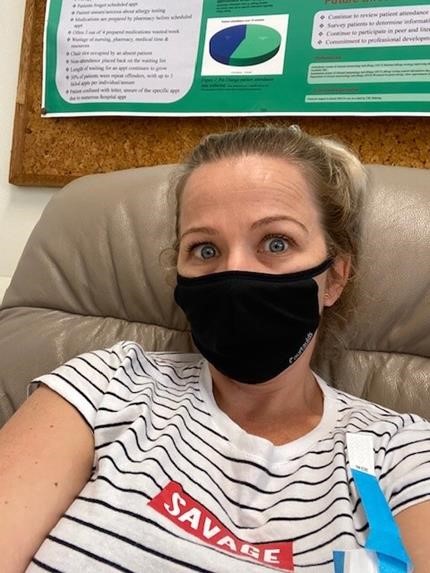 Rachael experienced blindness in one eye at 20 years old and went to a GP. She received treatment for an inflamed optic nerve, which fixed her vision. She thought it was weird, but put it behind her. There were no other obvious symptoms so it was concluded it could have been a virus. MS was never mentioned.

Life continued on with no symptoms, besides an ongoing sensation of pins and needles in her back. Rachael put it down to a pinched nerve.

In her mid-twenties, just six months before her wedding, Rachael got Bells Palsy and experienced pins and needles on her tongue. When she went to look at herself in the mirror, Rachael couldn’t open her mouth. She was diagnosed with Bells Palsy and received treatment which fixed it. The Bells Palsy was put down to stress.

About five years later in 2011, right after giving birth to her second child Rachael suffered a period of pure exhaustion and literally couldn’t get up physically in the morning. Her GP said she was healthy and to just get more organised.

Then, three years later in 2014, Rachael experienced panic attacks. She was working full-time with two young children. Her vision started to go blurry so she went to an optometrist who asked if she had been tested for multiple sclerosis. Rachael was shocked, it was the first time anyone had mentioned multiple sclerosis to her.

“I remember being shocked at the suggestion my blurry vision could be caused by MS. It was the first time anyone had mentioned multiple sclerosis to me.”

Rachael was prescribed glasses but her eyes got worse. She went to her GP and the eye hospital again, learning her optic nerve was inflamed. She was sent to a neurologist at the MS Clinic. Rachael thought back to the optometrist and she was shocked! She was reeling and questioning “What is going on!?” and wanted answers fast.

Rachael had to make an appointment to see the neurologist and there was a two month wait. But, Rachael was working all day on a computer and suffering terrible headaches. Her vision would go from black to white to grey, and Rachael was feeling dreadful.

Rachael says, “I just couldn’t live like that. So I called the neurologist who talked to me at length about my symptoms on the phone. He told me that they were all textbook MS symptoms and asked me to get all the tests done before I saw him so he could make the diagnosis at the appointment. It allowed me to take action and control of my life again and mentally prepare. He was amazing.”

On 24 July 2014, the neurologist confirmed Rachael had lesions and she was diagnosed with multiple sclerosis.

The neurologist did not start her on treatment immediately but asked to see how long it would take for her body to recover naturally, and it took 6 months. She discovered that a having a hot shower resulted in a flare-up and her vision would go blurry. When she cooled down, her vision would come back. Reflecting on her diagnosis Rachael says, “It won’t kill me and I was relieved because I was well prepared. I knew people were living with it and even have a relative of my husband's living with MS.”

After her husband and daughter were involved in a serious car accident, Rachael experienced paralysis from the waist down.

Thanks to fundraisers like you, MS sent out a physiotherapist to Rachael's home to help her start walking again. Responding to Rachael's anxiety, the MS Physio kept in contact providing ongoing care, exercises, tips and, most importantly, confidence by continually pointing out the positives.

Rachael says “She’d tell me I’m healthy, I was nearly there, my balance was good. She changed me because I realised I would be OK.”

Rachael lives with headaches, insomnia and anxiety. Over time, she's learned the tools to pull herself up.

"I do have difficult days, but I get up and get on with it. In my eyes, I have to set an example for my kids. I want them to look at me and say 'Well, mum had something and she got on with it."

“It’s OK to have a crap day, but I don't stay there. You have to come back up and join everyone. I allow myself to have a bad day… I may need to have lay down and that’s OK."

For many people with MS, the symptoms are invisible.

There's been occasions where strangers have asked Rachael to get up out of a seat on a train because they perceive her as young and healthy.

“Just because you can’t see MS, you can’t judge people because you have no idea what they go through every other day. It could be a great day, but the rest of the days could be difficult. No one knows what I’m going through unless I tell them."

Rachael will be joining you, me and the rest of the wonderful MS Community in Sydney. Make sure you give her a wave if you see her at the start line! 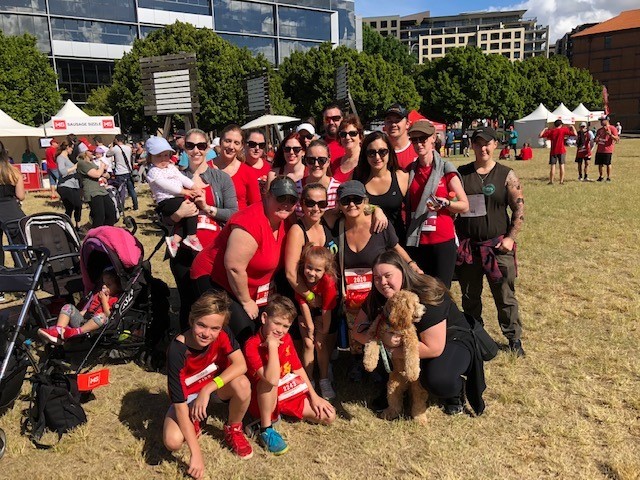 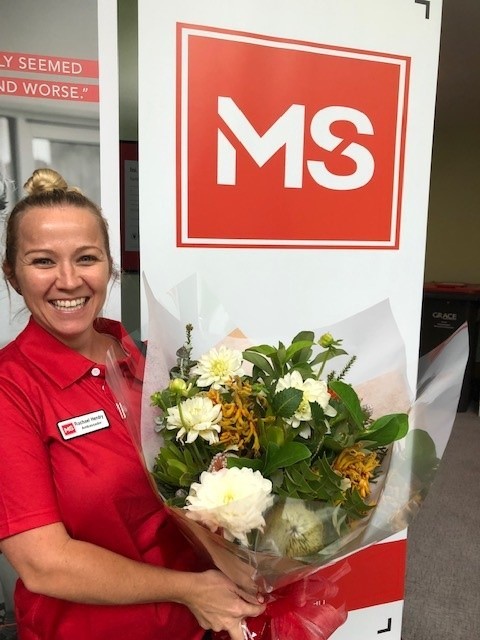